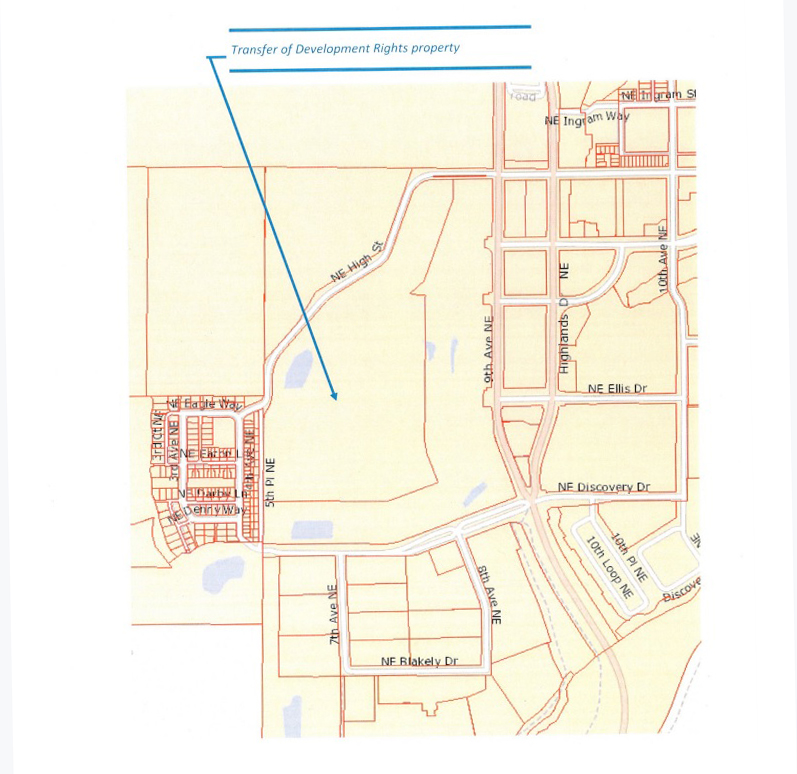 How many more homes should be built in Issaquah Highlands? That is the question now before Issaquah’s City Council. In January, the council’s Land and Shore committee said: no more than what are already approved to be built. That’s approximately 438 (see February Connections News). But it could be 100 more. How? Through a program to preserve open space called Transfer of Development Rights (TDR).

Issaquah’s Urban Village Development Commission (UVDC) reviewed the proposal in December, referred to as Agenda Bill 7215 (AB 7215), which includes an affordable housing element in keeping with Issaquah Highlands’ requirement that 10% of housing be affordable. The UVDC recommended approving the proposal. But the UVDC approval came with a caveat, that their decision was “without the benefit of a SEPA determination.”

The State Environmental Policy Act (SEPA) provides for a “checklist” to determine impacts that a developer might need to avoid or address (or “mitigate”) in a project. The environment and traffic are a couple considerations in the SEPA Checklist.

The Issaquah City Council began reviewing the proposal in January. At their meeting in February, the Council’s Land and Shore Committee considered both the 100 TDRs and the affordable housing element. Based solely on opposition to the TDR proposal, they agreed unanimously to recommend the full council deny the proposal.

With a recommendation to deny at the City Council’s February 21st meeting, the council opened a public hearing and heard more information from Polygon Homes. Council President, Land and Shore Committee Chairman, and Issaquah Highlands resident, Stacy Goodman, “moved” to leave the hearing open until April 17th, and to remand AB 7215 back to the council’s March 2nd Land and Shore committee, which passed unanimously.

At the March 2nd Land and Shore Committee meeting, Keith Niven, Issaquah’s Director of Development Services, brought information from the SEPA checklist, such as impacts on infrastructure. Most of these impacts have been identified and mitigation planned. However, Niven explained that the traffic portion of the SEPA checklist was still not finished. Details on that topic would be brought to the April 6th Land and Shore meeting.

Next, Niven introduced the affordable housing element of the proposal, showing on the big screen five options. He characterized, “These five choices are basically an opportunity for feedback from the (Land and Shore) committee.”

Councilmember Mary Lou Pauly thanked staff and the applicant, saying, “This really helps. Thank you to Polygon for bringing this in. I am thrilled with this first list.”

Councilmember Paul Winterstein shared that he learned recently from an affordable housing expert, “When there is a builder who is willing to build affordable housing, we should look at those as very valuable opportunities and we should not miss them.”

Stacy Goodman, tempered her enthusiasm with, “Having options is great. The only thing that is missing here is more analysis. Which is best for the community and why.”

The Land and Shore Committee revisits this topic on Thursday, April 6th at 6:30pm, at Council Chambers. It can also be viewed live at ICTV. Audience comments are welcome. The public hearing will continue on Monday, April 17th.