Issaquah Highlands has new park in its future, one with panoramic views, park amenities for all ages, shelters and play facilities all along a 1,700-foot-long multi-use trail that is now a street. We are talking about the west end of High Street, which runs along the northwesternmost edge of the future single-family home neighborhood of Westridge North, developed by Polygon Homes.

Preliminary concepts for the High Street Linear Park were presented to Issaquah’s Urban Village Development Commission (UVDC) by Polygon Homes on Tuesday, March 26, 2019. The UVDC was tasked with reviewing a conceptual design for the new linear park, to provide feedback to City staff and an opportunity for the public to comment on the designs. Watch the entire UVDC meeting at the City of Issaquah’s YouTube channel.

This plan will convert the western portion of High Street into a community park in Polygon’s Westridge residential neighborhood. In 2018 the Issaquah City Council approved this conversion  of High Street to a multi-use trail with activity nodes and an view overlook. One stipulation of Council approval was that the design must go through a robust public process. 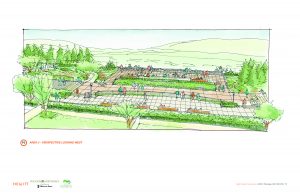 Hewitt’s conceptual design of the High Street Linear Park is based on public survey in 21018. This middle portion provides westerly views and recreational amenities.

Last Fall, the developer’s consultants conducted a survey asking what the community would like to see in the park. They also asked the community to prioritize its suggestions and ideas. Using this information and working closely with the City of Issaquah and with the Issaquah Highlands Community Association (IHCA), Polygon’s design consultants identified features and concepts for the park and drafted a conceptual design.

The entire concept, with renderings and features lists, can be accessed online on the UVDC webpage.

The design was presented to the UVDC and the public for review and feedback. All four of the UVDC commissioners present were also residents of Issaquah Highlands: Geoff Walker (Chair), Karl Leigh (Vice-Chair), Ben Rush, and Michele Kemper. 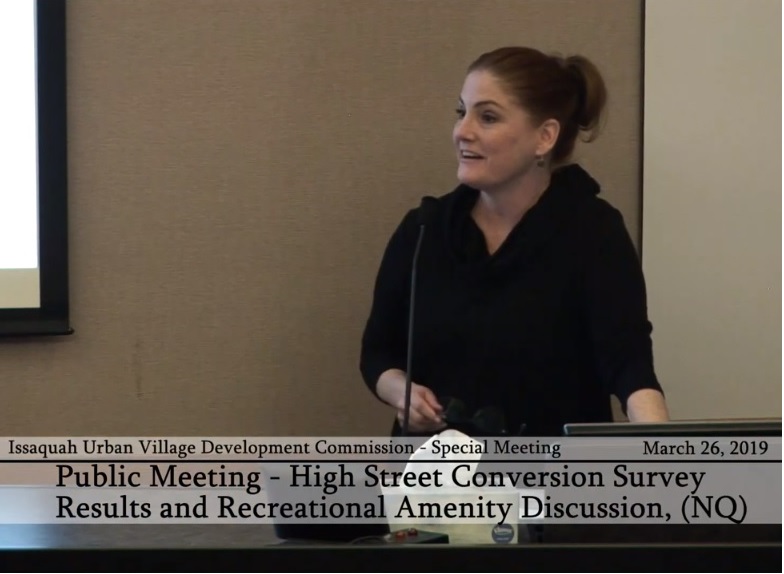 Sarah Hoey, Executive Director of the IHCA, explained how she partnered with the City of Issaquah to make sure the design of the High Street Linear Park is in keeping with Issaquah Highlands standards.

Public comments were provided by Issaquah Highlands residents: Mike Zalewski of West Highlands Park, Chris Shaning of Westridge South, and Brian Smith of West Highland Park. Sarah Hoey, Executive Director of the IHCA spoke about the oversight her organization provided during the planning of the park, and the care with which future maintenance by the IHCA will be funded and managed.

Next steps: As soon as the western extension of Ellis to West Highlands Park is open, site work can begin on converting the road to a trail, to prepare the land, and to work with the underground utilities and infrastructure. The park does not have to be completed until the North Westridge single family neighborhood is substantially complete (before the last 10 homes are completed). Construction begins on these homes in 2019, but completion is TBD.