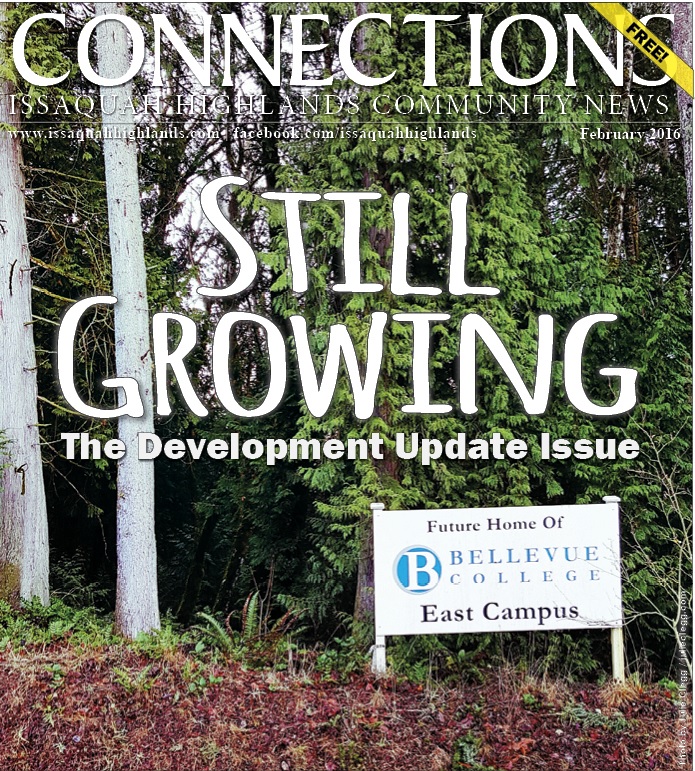 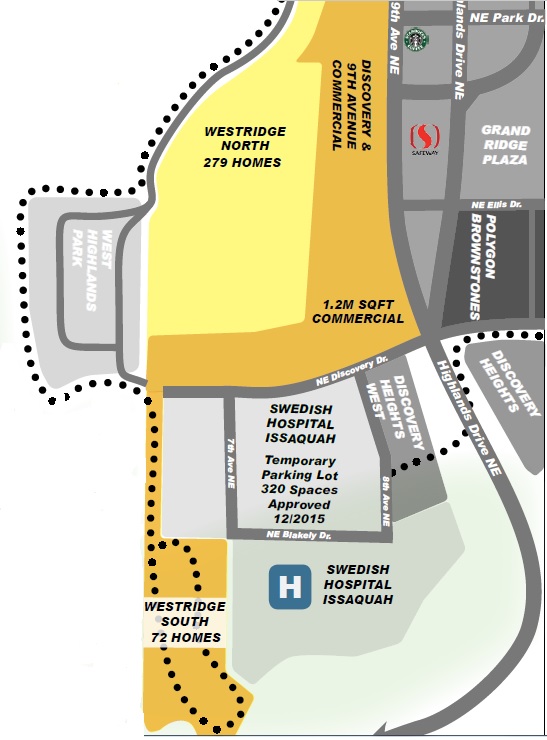 1st in a series, as published in February 2016 Connections News

A popular pastime in Issaquah Highlands is to follow new growth and building. Issaquah Highlands was designed to be a dense, urban-style community. There has been quite a lot of development in recent years; there is still more to come. Besides bringing you the details of what’s expected in the near future, we are also bringing you useful information on the public process of land development.

Start with this: Most of the undeveloped land in Issaquah Highlands is owned by private developers. While it is very American do what you will with your own property, this is no longer the Wild West. All land is governed by zoning and the land in Issaquah Highlands is also governed by development agreements. These are contracts between the City of Issaquah and developers, such as Port Blakely and Swedish Hospital.

But when does the “public process” begin? It already has! First, the City negotiated the development agreements (DAs). City decision-makers are residents like you and me, elected officials and appointed, most of them volunteers. From the City Council to the Urban Village Development Commission (UVDC) the public’s interests are represented by these officials.

But what about you? Everyone else can join in throughout the process. Public Hearings provide a formal setting for public comment. Town Halls are less formal. But all along the way, every City Council meeting starts with an open opportunity to provide public comment. The City also welcomes direct email and social media as a means to provide input.

But before you chime in, get the facts. In this story you will find details about all the undeveloped parcels in Issaquah Highlands. You will also learn from several public representatives, civic leaders who live or work in Issaquah Highlands. If you’d like to know more, go to the City of Issaquah’s website. It’s packed with useful information.

The entire story is available in Connections news on-line which includes a chart for Central Park and Bellevue College future plans with public input icons placed to show where you can provide your formal input.

Originally planned as only a commercial development, a new, additional development agreement in 2011 added 500 residential units to our town center, most of which ended up in the old Microsoft, now Polygon property.

It was divided into three parcels. Westridge South (11.6 acres): Polygon submitted a preliminary plat application in December 2014 for 72 single family homes with parks and trails. They hosted open house for the community in August 2015, discussing plans and concerns. UVDC will review the application this month, conducting at least one Public Hearing. The UVDC makes a recommendation to the City Council, who renders the final decision. Construction could begin in 2016.

Westridge North (26.8 acres): In a preliminary planning phase for many months, “The Pre-App part of the land use permit process is a collaborative and multi-departmental review that precedes the formal application. We want the application to be as close as possible to something that can be approved before the formal application process begins.” Lucy Sloman, Designated Official for the Urban Villages, City of Issaquah. The city just received a preliminary application for one of three sections, which might be ready for the UVDC to review this summer, when they would conduct a public hearing.

Even before applications are submitted, we are represented by our homeowner’s association, the IHCA.  “The IHCA must approve all aspects of a development, guided by the Development Agreement.”  Sarah Hoey, IHCA Executive Director.

9th and Discovery Drive (21.5 acres): This commercially zoned parcel will likely proceed with a Site Development Permit (SDP) application. This parcel has “inherited” all the 1.2M square feet of commercial space from the previously Microsoft property.  “Shelter Holdings is beginning discussions with the City regarding future mixed use plans for our property in Issaquah Highlands.” Tia Heim, Shelter Holdings, LLC (An affiliate of Polygon Homes.)

Bellevue College made no more progress towards creating a new east campus until 2015. Late last year the college began scouting for a different location for their East Campus. At press time, all we know is that the college no longer wishes to build a new campus on the Issaquah Highlands property. We can still hope they will find a location in Issaquah.

See in Connections news chart simplifying possible futures for the Bellevue College Property. Regardless of the path this property takes, development details (# homes, design standards, etc.) are governed by a Development Agreement.

Along 10th Ave NE on either side of Falls Drive

Come back to IssaquahHighlands.com for more about development in the Highlands, or see February Connections News for the entire story.