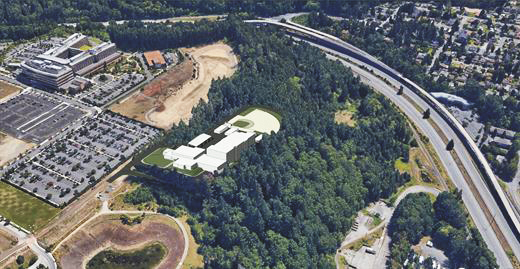 The Issaquah School District reported at the June 13, 2018 meeting of the School Board that it will no longer pursue the City-owned property west of Swedish Hospital and the Westridge South neighborhood in the Issaquah Highlands. The District had hired arborists and geotechnical experts to survey the site. It was the geotech report that brought the project to a close.

“I have happy news and disappointing news. Opening with the happy news, we have purchased the Volpe family property for elementary school #16,” Ron Thiele, Issaquah School District, Superintendent, began his prepared comments.

“Now the disappointing side for me is the Issaquah Highlands ‘Hilltop Property.’ This is the site initially I had very high hopes for with its proximity to the very densely populated community of Issaquah Highlands… I was excited by the possibility of putting a school next door to this rapidly growing community. However, the geotechnical report raised serious concerns about the stability of the hilltop during a seismic event…Therefore, I have asked the staff to cease the due diligence on this site.”

Pointing to depths of up to 35 feet of the site’s loose, silty sediments of “Vashon Recessional Outwash” above the underlying dense, more stable “Fraser to Pre-Fraser Undifferentiated Sediments,” Steve Crawford, Director of Capital Projects for the Issaquah School District, explained the underlying reasons for abandoning the pursuit of the site.

“Slope stability factors are less than what is required,” Crawford said. The school administration concluded that, “from a slope stability standpoint, this is not a site recommended for a school.”

Lisa Callan, school board director and Issaquah Highlands resident, asked what this means for the families in the Highlands. Jake Kuper, Issaquah School District Chief of Finance and Operations answered, “the Volpe site will help the Highlands,” also mentioning a site at 43rd and 228th.

The Volpe property at 4305 Issaquah-Pine Lake Rd SE, Sammamish, is two miles north of Issaquah Highlands. The site at 43rd and 228th is known as the Providence Heights property.

Superintendent Thiele emphasized, “I can’t just walk away from the Highlands. It is the most densely populated part of the school district and will have a lot of growth still to come.” He went on to explain that considering the time it will take to “reinvestigate” other sites of interest in the Highlands, it is not likely Issaquah Highlands will get the #17 elementary school of the current bond. For additional schools, Thiele explained, “We have had discussions about the Lakeside property and about the Bellevue College site that’s up there. And there are a few others we can continue to explore.”

Callan began the board’s discussion talking referring to other potential sites in the Highlands.

“We need to go back and do due diligence on every site again,” Callan asserted, noting that since the District began this search, the City ended the development agreement (DA) that governed land development in the Highlands. She pondered what the end of the DA might mean for developers in the Highlands now.

“We should refresh on that and we should be talking about how we get land set aside for schools,” Callan said.

Highlands Council reported on Monday, May 14, that the Issaquah School District (ISD) representatives provided preliminary research results to the Issaquah City Council from studies they conducted on the Highlands property. Crawford described drilling done on in the property indicated that soft soils in their samples were 30 feet deep, below which is a solid, dense base.

The June 13 announcement brings to a close the Issaquah School District’s interest in building a small footprint elementary school on the land just west of Westridge South neighborhood that formally began in June 2017.

The Issaquah School District public announcement can be accessed, along with the geotechnical report, here: https://www.issaquah.wednet.edu/news-details/2018/06/14/potential-highlands-elementary-school-site-update

A podcast of this meeting will be posted at https://www.issaquah.wednet.edu/board/podcast