New School West of Westridge? Not so Fast 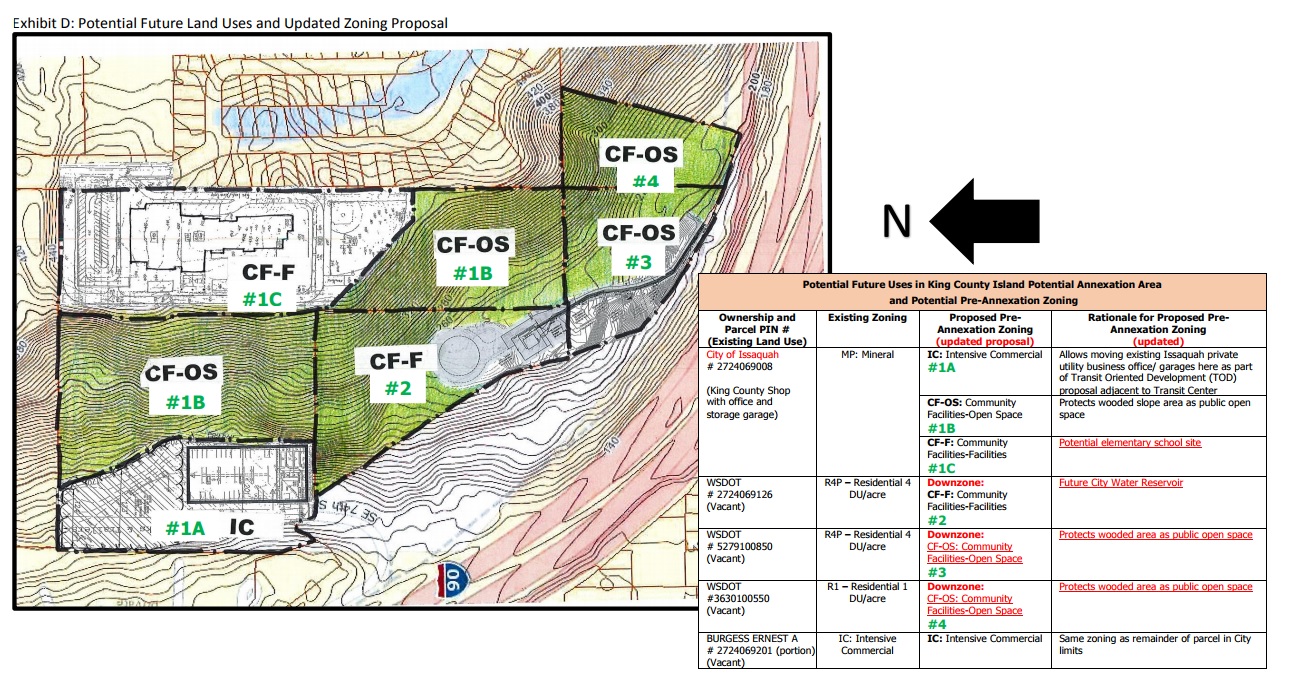 The City of Issaquah City Council is considering a proposal by the Issaquah School District to site a new elementary school adjacent to Issaquah Highlands. However, the proposal is only one part of a larger zoning proposal.

The City of Issaquah recently bought land from King County which is adjacent to Issaquah Highlands’ western boundary. The property will be annexed into the City, but the first step is to establish zoning. This step is managed by Agenda Bill (AB) 7433, now before the City Council.

One Community Facilities-Facilities (CF-F) zone is proposed for the upper forested bench so that a new elementary school could be built there. The other to site a new water tank to serve future development on the valley floor.

The Issaquah School District presented a letter of interest in June to build a new “urban-concept elementary school” on the proposed upper CF-F parcel, land that is currently forested, adjacent to the new Issaquah Highlands neighborhood of Westridge South. 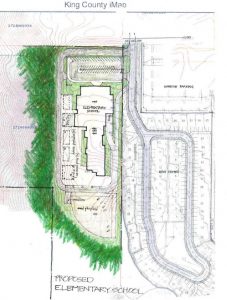 Interest in additional schools is high in Issaquah Highlands. Currently, 125 Highlands kindergartners and about a third of the Highlands elementary students are bussed off the hill.

However, comments during the public hearing did not support the school siting, including two Highlands residents who expressed concerns about this site.

Issaquah resident Connie Marsh asserted that all parcels should be CF-Open Space except for the water tower and the IC parcel. “In our land use vision we have very a straightforward sentence that we will protect our forested hillsides. This is a community value that our own Comprehensive Plan emphatically puts as a top priority… There are other places schools could be built.”

Issaquah resident from the Newport area, Susan Naville, also supported CF-Open Space zoning for the upper parcel of land. “We have a lot of land and we have a lot of money and I just don’t know if this is the right location for a school.” 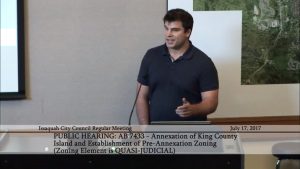 Matt Meyer, of the Sunset Walk neighborhood in Issaquah Highlands, expressed concern about placing a school on the edge of an unstable hillside, one that “King County Land Slide Risk assessment has labeled as an extreme hazard.” (See King County Landslide Hazard Areas Map on their website for more detailed information.)

Other residents spoke out regarding concerns about the proposal, such as parking and traffic, some from neighboring West Highlands Park.

In response to public comment opposing the removal of trees for a school, especially trees at the top of a visible, steep slope, the Issaquah School District has altered its June proposal to save 1.82 acres of trees, details it presented on July 17th.

In addition to zoning, the school district’s proposal requires construction code change to include an “urban-concept elementary school” policy approved by the City. The Planning Policy Commission reviewed the proposed code changes on July 13th. The Commission voted unanimously to recommend approval with revisions to the City Council.

After public testimony and discussions about procedure, the City Council directed the administration to draft an ordinance to establish a pre-annexation zoning and to annex the property, but not to zone any portion Community Facilities – Facilities (CF-F, the zoning required for the school and the water tank). “Draft” is the operative word; no decision could even be suggested at this meeting by law. As a quasi-judicial proceeding, the Council cannot make any decision or even debate the underlying issues before the second of the two hearings. All options are still on the table.

How can you get involved?

You can provide information at the second public hearing on September 5th. Or you can send it in an email to City Council. Either communication becomes part of the public record. Reference Agenda Bill 7433.

Find out more on the City of Issaquah’s website. Read the agenda packet of City Council Regular Meeting of July 17. Make note of the rules of a quasi-judicial proceeding. And examine the City’s Comprehensive plan, Land Use section, also on the City’s website.

Final action is not expected until the second Public Hearing on September 5th.