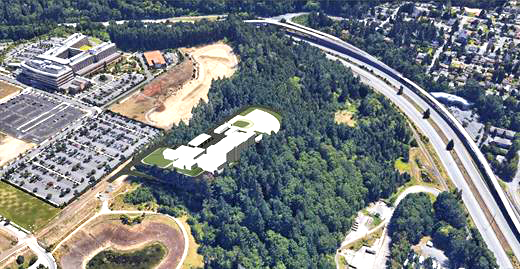 This concept illustrates how the Issaquah School District could site a new elementary school in the Highlands. (Source ISD)

The City Council voted on October 2nd to approve pre-annexation zoning on land it plans to annex into the city, part of which the City recently purchased from King County. These 32+ acres sit adjacent to Issaquah Highlands west of Westridge South and south of West Highlands Park. They stretch down the forested hillside to the Issaquah – Preston Trail along I-90.

What might have been a routine process became a hot topic when the Issaquah School District expressed interest in a portion of the land as a potential site for a new elementary school. In a letter to the City of Issaquah on June 16th, 2017 the District proposed using the northeastern most section of the site. Concurrently, the District pursued new development standards for Compact Schools so that a smaller piece of land could accommodate a new school. These development standards were approved by City Council at regular meeting September 18, 2017.

However, in order for a school to be built on the land, the northeastern most section would have to be zoned Community Facilities-Facilities (CF-F). When this topic was addressed on September 5th, one reason members of the council explained there was no action was because the Council had not yet approved the size and boundaries of each parcel.

With the approval of CF-F zoning on October 2nd, the School District now intends to proceed with investigating the viability of building a new elementary school on the site. And there are several steps the Council would have to take as well. The land still needs to be subdivided through a Short Plat process. And the City would need to consider whether they wished to sell the land to the District, or to sell it at all, for that matter.

June 20, 2017 the City of Issaquah purchased 20.35 acres of this land from King County (Parcel 2724069008) for $650,000 (according to King County documents). This parcel is part of a larger area of King County and that had remained in King County as Issaquah annexed land around it, such as Issaquah Highlands. The matter before the City Council on September 5th and again on October 2nd was how to zone the larger section of land that included this, and other parcels that were still in King County.

About the pre-annexation zoning, also see:

City Of Issaquah story is HERE >>