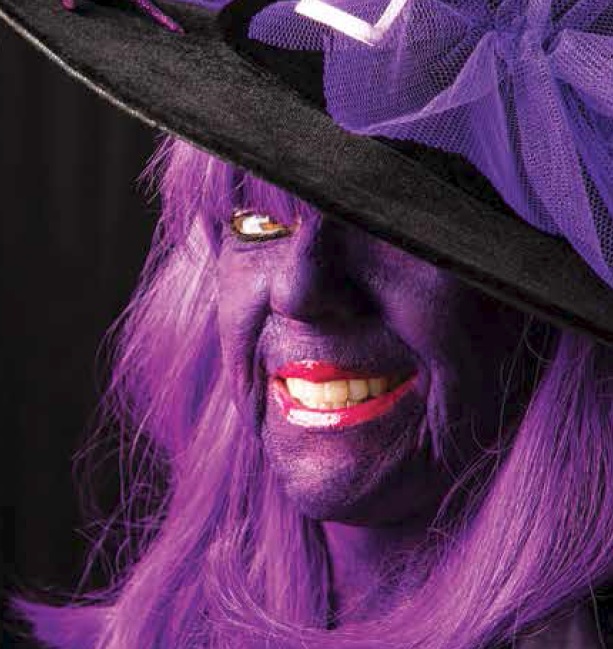 November Resident Profile: The Issy Witch
You have seen her over the years at our haunted events, such as Green Halloween, but do you really know her? She delights the little kiddos (as she calls them; she is a British witch, after all!), teases the teens and chuckles with the parents. Any Halloween ghoul or goblin should recognize her: she is the Wicked Witch of Issaquah Highlands, or known to some as, Issy the Witch!

How long have you lived in Issaquah Highlands and where did you live before?
Greetings, oh greetings oh worthy ones, oh
I’ve lived amongst you for eight years or so
But you would never notice me come rain or come snow
For on Hallo’s eve I once lived long ago
In a land far away called the Sammamish Plateau

Are you a good witch or a bad witch and how can one tell the difference?
Me, a good witch or bad? It is to be said
A good witch is better than one you that you dread
Look deep into her eyes and you will tell right away
If it’s wiser for you to leave or to stay.

Where did you get such fantastic, purple hair?
Look twice or look thrice at my hair all a glow
And remember it wisely, to Great Clips you go!

Do you have magical powers? What are they?
Those magical powers are here for the stay
Don’t mess with this witch for she’ll send you away
With a ‘slugs and snails, and puppy dogs tails’ spells abound
Beware for this witch will melt you on the ground!

Are there any others in Issaquah Highlands with magical powers?
Tis known to be said there are others around
Who possess such powers like me in this town
If ever you meet them, beware to this day.
Be careful, be cautious, and watch what you say!

Is there anything else you’d like to share with our readers?
Beware I say, beware!
For every year on Hallows Eve,
The Wicked Witch of Issy Highlands comes hither from a house on Village Green
Where lightening strikes, spiders climb and cob-webs adorn
The spooky twilit chandelier porch.
A pirate and skeleton beseech a sunken ship’s treasure
And the Witch’s broomstick, bubbling smoking cauldron,
And spell book await.
Fog bellows, flashing fiery embers flicker, jack-o-lanterns sit ‘n stare
While music haunts the air.
Tis the night for candy-seeking trick-or-treaters to knock at her door
And who dares where, but beware I say, beware!

The monthly Resident Profile is produced by Nina Milligan. Photos of Issy the Witch (including the October 2014 cover photo) were done by Julie Clegg.