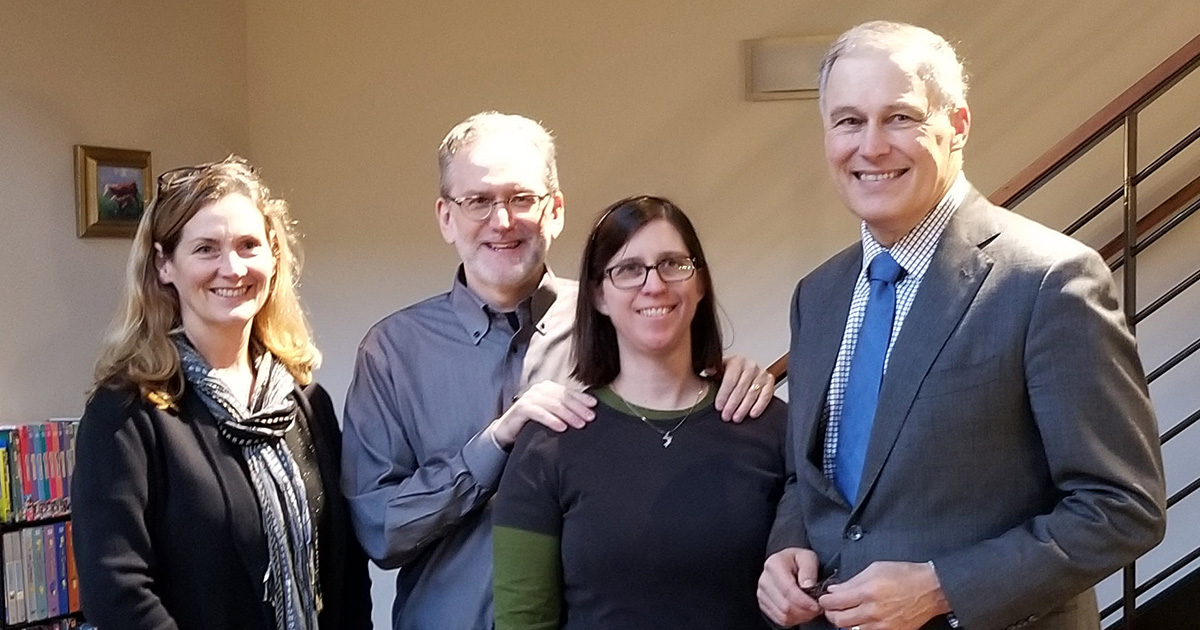 When Washington State Governor Jay Inslee made plans recently to visit Issaquah, he specifically asked about seeing the zHome neighborhood while he was in town. Governor Inslee has long been a big supporter of reducing human impacts on the environment. He wrote a book about it in 2013: “Apollo’s Fire – Igniting America’s Clean Energy Economy”. In his 2018 State Of The State address on January 9th, Governor Inslee unveiled his carbon tax proposal. I think the Governor’s visit to the zHome neighborhood was partly designed to raise awareness for his proposal. 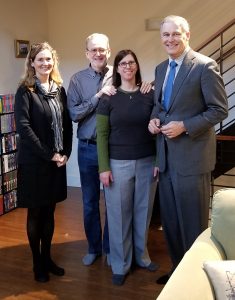 It was Friday, February 2nd at about 3pm when Issaquah Mayor Mary Lou Pauly arrived ahead of the Governor. She brought David Fujimoto, City Director of Sustainability, and City Administrator Emily Moon. Brad Liljequist, the Project Manager for the zHome project was also on hand.

Then the news media arrived and interviewed us a little. TV reporters Essex Porter from KIRO News 7, Jim from KOMO News 4, and Tim Smith from the City of Issaquah’s ICTV 21. Here is some ICTV video on Twiter of all the arrivals. Reporter Nicole Jennings story for the Issaquah-Sammamish Reporter can be found HERE>>>.

The Governor Inslee was accompanied by his wife Trudi, his NW Regional Representative, Julia Terlinchamp, and his Senior Policy Advisor on Energy Lauren McCloy. After being introduced to our neighborhood by Mayor Pauly, Governor Inslee talked a bit to the media and then joined Karin and me to tour the inside of our home.

We told the Governor that our favorite aspect of our home is the heavy insulation and air-tight envelope. We told him how those features make it easy and cheap to keep every corner of our home the same comfortable temperature without cold or hot spots. Brad Liljequist described our ground-source well system and hydronic heat in the floors. Karin and I explained how instead of paying for electricity, we net about $900 a year income selling the excess energy generated by our solar panels back to the grid.

We showed the Governor our heat recovery ventilator in the attic and how we use the clerestory window and the “stack effect” to keep our place relatively cool in the summer without an air conditioner.

It was pretty exciting to have the Governor visit our little zHome neighborhood and home. I suppose the whole visit did feel short. We didn’t have time to talk about nearly as many of the features of our zHome as we wanted. But I guess we could always go on longer about the home we love. And hey, it does make you feel pretty good about your home purchase when the State Governor takes an interest in it!

As published in March 2018 Connections