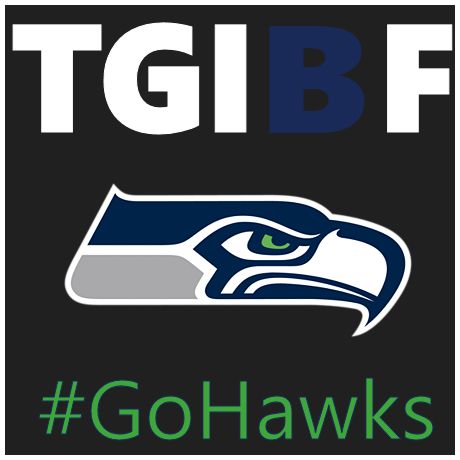 It is a given that Seattle, and Pacific Northwest in general, have scores of Seahawks fans. Buoyed by the recent success of the Seahawks, and in the spirit this Blue Friday, I’d like to share my recent interviews with a few of our own Issaquah Highlands fans. 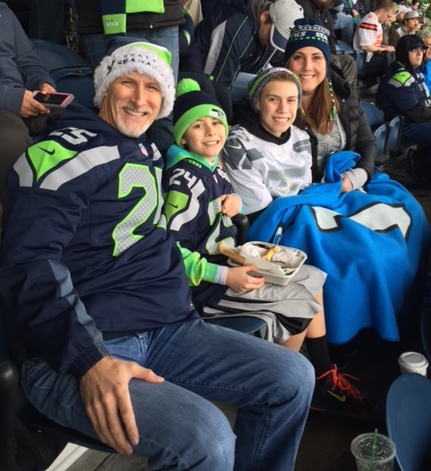 Shawn Taylor has been a Seahawks fan for “a long, long, long time.”  He has attended quite a few Seahawks games, referring to them as a “unique experience in the sporting world” that he enjoys sharing with his sons.

Ami Desai-Mehta has been a Seahawks fan since the past six years, having attended many Seahawks games over the years, all of them with members of her family.

Ian Anderson is a freshman at Issaquah High, and is their starting free safety and a starting wide receiver. He has been a Seahawks fan since 2004, and has attended over 30 Seahawks games.

IH Sportshound: “Who is your favorite Seahawks player, and why?”

Shawn Taylor: “I love the determined, never-say-die effort and attitude of the best running backs, and Ricky Watters and Marshawn Lynch have exemplified that for me. But the greatest Seahawk and best offensive lineman ever is Walter Jones.”

Ami Desai-Mehta: “Thomas Rawls, because when he plays he is almost unstoppable and I got to see him in person! Additionally, I like Jermaine Kearse because he is a great player and is a homegrown player from UW.” 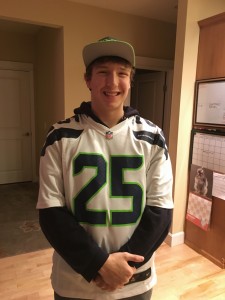 Ian Anderson: “Richard Sherman, because we have very similar playing styles [at defensive back] and we both love to talk trash.”

IHS: “In addition to your favorite player, what are two things you like about the either the Seahawks team and/or other individual players?”

ST: “I like the underrated guys who get the job done.  I’m of course a big fan of Richard Sherman and Earl Thomas and Russell Wilson, but it’s the Cliff Avrils and Brandon Mebanes and Jon Ryans who don’t get all the press, but are the heart of the team.  And it’s awesome when the defense dances!”

ADM: “I love how they always come out and play with a passion and a chip on their shoulder, and how they take chances on players that may have off-the-field issues and turn them in to good men, in addition to great football players.”

IA: “I like how they have built their team from scratch with a majority of the roster comprised of late round draft picks. Additionally, they all have and play with a winning mentality.

IHS: “What are some of your favorite Seahawks memories, excluding the past two Super Bowls?”

ST: “There are so many. The final game in the Kingdome ended painfully, but it was still memorable and it felt symbolic with the stadium change and the beginning of the Paul Allen/Mike Holmgren era after what seemed like an eternity of mediocrity. And of course the 2005 NFC Championship win and the Beast Mode run in the upset win over the Saints, and the end of the Green Bay NFC Championship game were all exciting; however, you just can’t top the deflected interception from Richard Sherman to Malcom Smith to defeat the hated 49ers and take us to our 2nd Super Bowl.”

ADM: “One of my favorite memories was attending the game against the 49ers this past season, as it was great to be with my family and the 49ers just could not stop Thomas Rawls that day. Also, the NFC championship game against the Packers was awesome because of the Seahawks miraculous comeback.”

IA: “My two favorite moments have been Richard Sherman’s famous ‘U mad bro?’ quip after Tom Brady was trash talking to him while the Patriots were ahead in the game [in 2012], and then the Seahawks came back to win. And personally witnessing Richard Sherman’s tip to Malcom Smith to send the Seahawks to their first Super Bowl win in franchise history was awesome.”

IHS: “What are some of your favorite Seahawks memories from the past two Super Bowls?”

ST: “I was lucky enough to attend Super Bowl XLVIII in New York and there’s nothing that could top that!”

ADM: “The demolition of the Broncos in Super Bowl XLVIII and Jermaine Kearse’s incredible catch from Super Bowl XLIV against the Patriots.”

IA: “Winning it. The main play [from Super Bowl XLVIII] that stuck out was the safety that the Broncos gave up to on their first play of the game.”

IHS: “If you were asked to give one piece of advice to the Seahawks team, what would that be?”

ST: “It would depend on the day, although after their performance against Arizona, they don’t look to need much advice.  I guess just reclaim the Super Bowl title for us this year.  Easy, right?  Go Hawks!!!!”

IA: “Stay true to your mentality, and continue to improve your blocking. 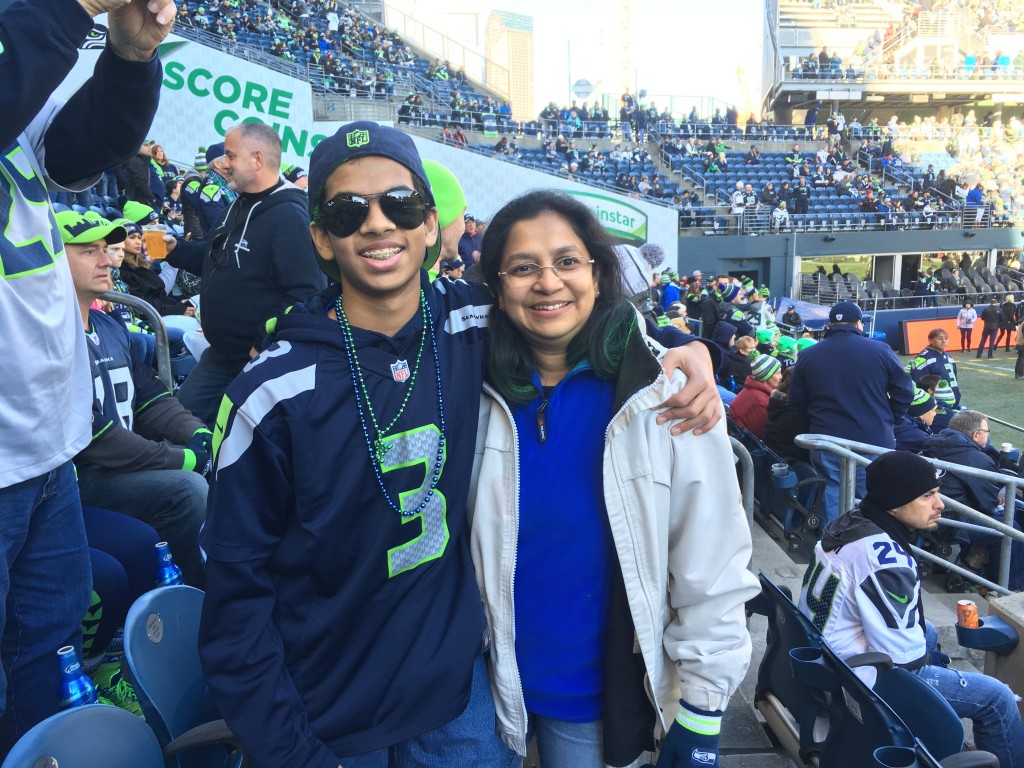 Aadit Desai Mehta is the IH Sportshound and a regular contributor to Connections news. Posing here with his Hawks-Fan-Mom, Ami.

See his other stories at http://ihsportshound.blogspot.com/