High Street Conversion to a Park One Step Closer 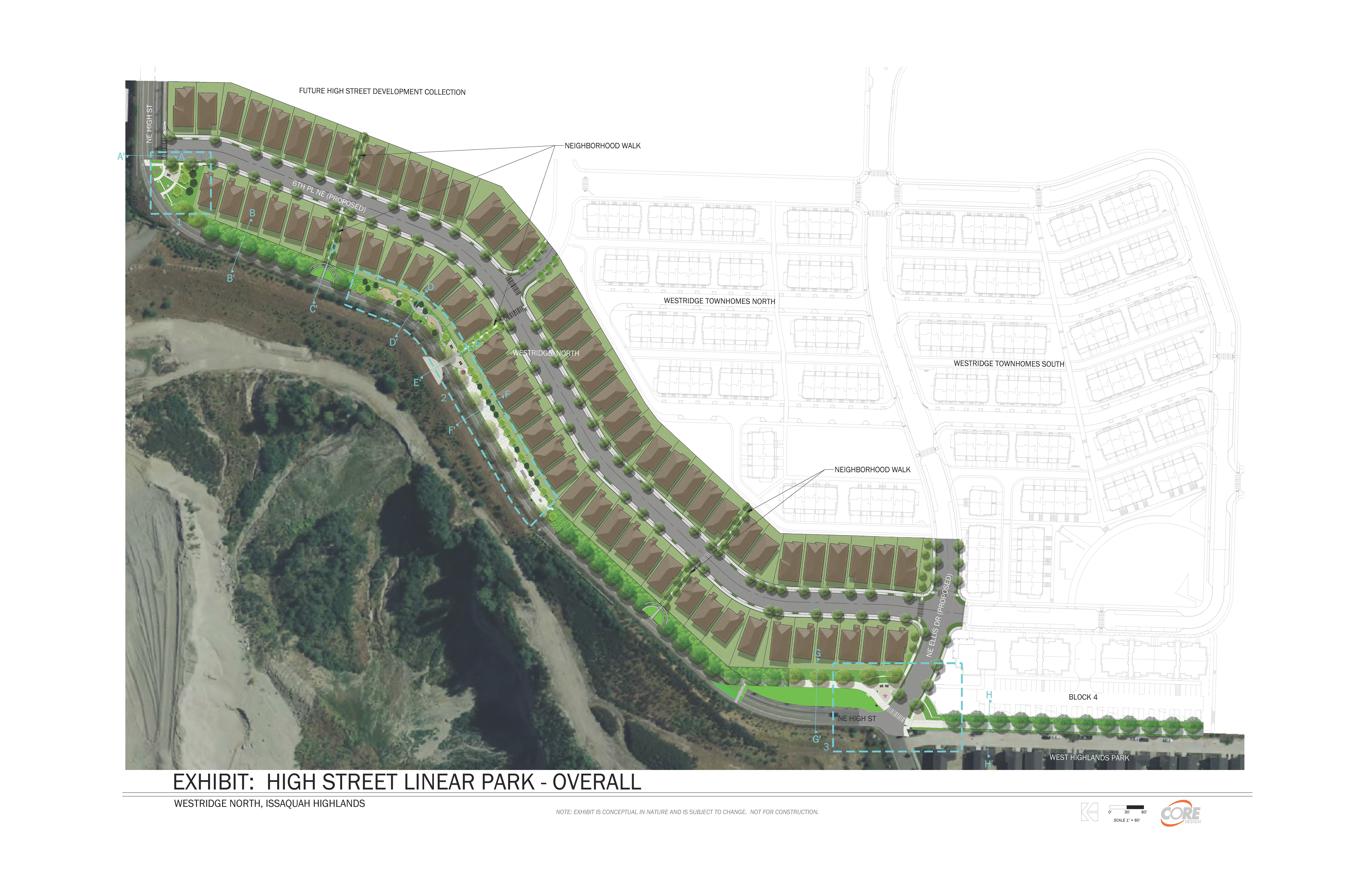 Last night the City of Issaquah Land and Shore Committee voted unanimously to recommend approval to the full Issaquah City Council for a developer / city proposed conversion of a portion of High Street in Issaquah Highlands into a linear park or promenade. Back in April the Urban Village Development Commission (UVDC) also recommended approval. Link to story here>>>.

Each committee member approached the proposal with different priorities, but all agreed in the end that they supported the proposal. Committee Chair Stacy Goodman (and Issaquah Highlands resident) chased down several questions including those geared towards assuring the public process designing the park would be robust.

Committee stand-in for member Tola Marts, Victoria Hunt followed that line also, as well as getting answers about safe vehicular access for residents of West Highlands Park. Committee member Paul Winterstein pursued such issues as well, plus those regarding the protection of the views from this park.

“The parks in Issaquah Highlands are a great thing,” Councilmember Hunt declared. She went on to suggest that this new park could provide important connectivity for bikes and pedestrians. And with such expansive views the proposed park could even provide education about the geography of the area through interpretive signage.

Councilmember Winterstein thanked the public for bringing their comments to the meeting and by email. Indicating his support for the proposal, Winterstein said, “I like parks! And parks can be quirky,” referring to the linear design of the proposed park. He went on to explain that his priority is the view, a view for all to enjoy, especially those who might not otherwise have access to such.

Several members of the Issaquah Highlands community attended the meeting and addressed the committee during audience comments. Mike Zalewski and Robert Swanson, both from West Highlands Park, presented a case against the proposal supported by details about access to their community. Brian Smith, also from West Highlands Park, was “OK” with the proposal but had concerns about parking and driver behavior. Smith also introduced a concern that resonated with the committee, that of water drainage from the uphill properties of Westridge that could generate problematic run-off for the park.

Karl Leigh and Geoff Walker, both 20-year residents of Issaquah Highlands and members of the UVDC, spoke in support of the proposal. Both described the current unimpeded configuration of High Street as not in character with the rest of the Highlands and that the park that would replace it would be very popular.

David Kappler and Connie Marsh, both residents of Issaquah, also spoke in support of the conversion. Nick Abdelnour, representing the developer Polygon Homes NW, explained how the proposal was a collaboration between Polygon and the City and that he “fully supports a public process” to design the park.

Goodman closed the committee comments with her support, summing it up with, “More parks, more better.” The vote in favor of recommending conversion of a portion of High Street into a park was unanimous.

The proposal now goes before the full Issaquah City Council under “regular business” at their meeting on Monday, July 16 at Council Chambers at 7pm.