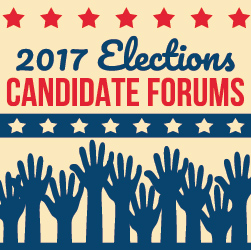 Hear directly from the candidates running for Mayor of Issaquah. Your primary ballot is due by August 1st.

Learn their positions on issues affecting our community. The forum is moderator-lead and driven by community-generated questions. Questions must be submitted prior to the event.

Submit YOUR question using the form below. The online form will be available through Sunday 7/16. You may submit a question when you arrive at the forum, up until 7pm.

The primary ballots are due by August 1st.

Questions for the candidates may be submitted onsite up until 7pm, Thursday, 7/19.

Nate is a long-time resident of the Issaquah area. He grew up in Klahanie in the mid-1980s, his parents choosing to settle there when there were only 300 homes. He is a proud graduate of Eastlake High School. He and his wife moved back to Issaquah, choosing the pioneer path like his parents, buying a home in Dahlia Park, Issaquah Highlands in 2006. They are raising three lovely daughters. Wife Darcy works locally as a real estate broker.

Nate is well known as a public speaker, serving as Master of Ceremonies, keynote speaker and expert panelist for many local and regional events. He is a graduate of Class of 2015 Leadership Eastside.

He has served on the Issaquah Schools Foundation, Board of Directors and Marketing Committee.

Nate was an Issaquah Highlands Neighborhood Captain from 2008-2011 and a IHCA Voting Board Member 2008-2010. Issaquah Highlands honored Nate as Volunteer of the Month in June 2009 and he was elected the Greater Issaquah Chamber of Commerce “King of Issaquah” to represent their organization from 2010-11.

We are pleased to have Nate volunteer as the 2017 Candidate Forum Moderator. He is responsible for gathering and curating the community’s questions for the candidates so that we cover as many topics as we can at each event. We are very glad to have Nate’s experience and steady, fair approach to important and sometimes controversial issues.

Candidate Forums – a Series at Blakely Hall at 7PM