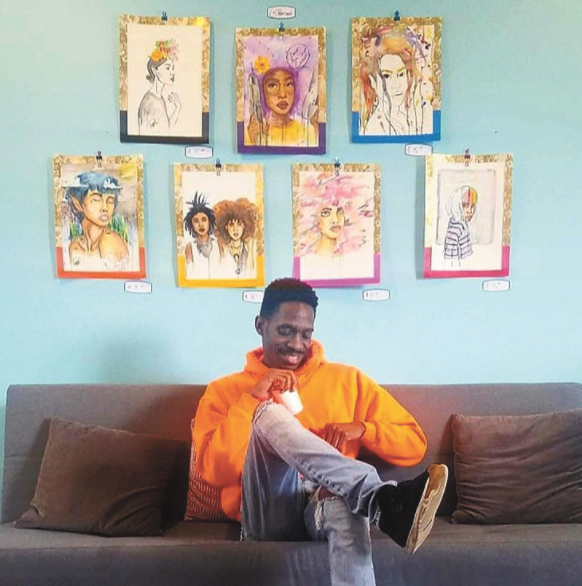 About the show: The continued movement of people to the Pacific Northwest has intensified opposing political ideas that were once unfamiliar to the region. While populations clash over the pros and cons of density, artEAST seeks to feature art that illuminates the individual self in urban spaces.

For this show, ArtEast asked artists to submit both 2-D and 3-D visual works of any medium and style that subverts historically urban-related visual media. This includes but is not limited to graffiti, advertising, and signs.

About Perry Porter:  Perry Porter is a painter and songwriter, focused on portraiture in the watercolor medium. Perry’s portraits feature women of color submerged in surreal/manga style settings. The vibrant colors and free flowing nature of his work not only gives a strong sense of playfulness and freedom but also discipline and control of his medium. “Art is power. Especially in modern culture. We look up to others as the standard of genius or beauty, but the problem is there’s no one that look like us. I want my family and friends to see faces that look like theirs, hair that curls like theirs, full lips. I want them to know that they are just as or more beautiful than the faces they see immortalized in museums.”

About ArtEast: Situated at the edge of many of Puget Sound’s urban centers, ArtEast serves both an urban and suburban population and expects the art in this show to incite conversations about the role art itself plays in an area that is being aggressively urbanized.