By Vicki GrunewaldJune 13, 2019Connections
No Comments 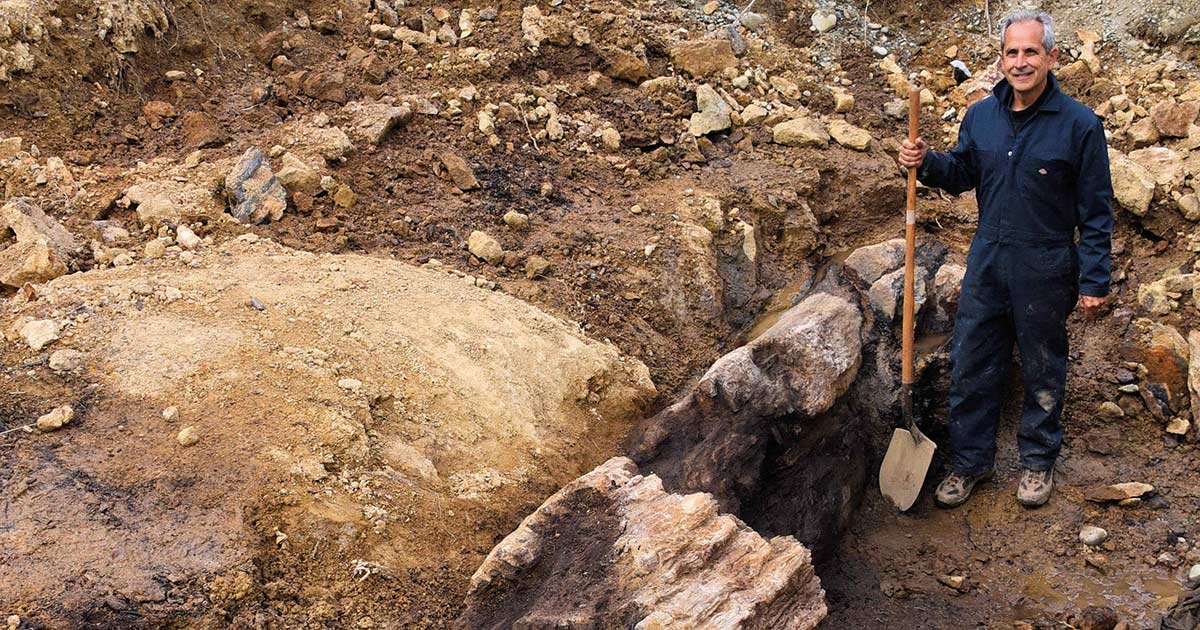 Roger Ulrich’s Harrison Street neighborhood property was undergoing excavation in October 2016 when his team discovered something unusual embedded in the bedrock – a large log of petrified wood. This discovery led Roger on an exciting exploration far into Issaquah’s past.

What exactly was uncovered?
Roger: Petrified wood is a fossil that is formed when wood is buried in the ground and the plant material is gradually replaced by stone. This process takes a very long time, usually millions of years. The wood in our fossil tree was replaced by minerals including quartz and iron, and the tree is between 35 million and 50 million years old. The portion that we uncovered measured 12 feet in length and 3 feet in diameter, but the log continues down into the bedrock at an angle, so we really don’t know how big it is.  We were able to remove most of the exposed fossil, but some was too hard to remove even with a jack hammer, so it remains buried in the ground.

How did the petrified tree end up on your property? Is this a rare find in this area?
Roger: This petrified log was buried in a volcanic flow between 35 million and 50 million years ago. The bedrock under much of Issaquah Highlands is volcanic flow called the Tukwila Formation and is thought to have come from Mount Persis, located near the town of Index. It is not uncommon to find small pieces of petrified wood when digging in rock under the Issaquah Highlands but finding such a large log is quite unusual.

How did you go about researching the significance of this find?
Roger: I started with the geotechnical report for our building lot, which eventually led me to several publications describing the geology of this part of Washington State. I also contacted George Mustoe, a research associate at Western Washington University and an expert on Washington’s petrified wood. I sent him several samples, and he was able to determine the composition of the fossil wood (including quartz and iron) and that it was a deciduous rather than an evergreen tree.

What was the most interesting thing you learned in your research of this discovery?
Roger: This find was an excellent opportunity for me to learn about the geological history of the area we live in, including the impact of volcanic eruptions and the many ice ages since. Discovery and learning are exciting to me!

What will you do with the pieces of petrified wood you saved?
Roger: The 12-foot long section we removed came out in many pieces as the fossil had broken apart during its millions of years in the ground. Collectively these pieces weigh a few tons! We reassembled part of the petrified tree by our front porch to serve as an art and conversation piece, and I am planning to use several of the other pieces for accents and furniture. The remaining pieces (several hundred pounds) will be distributed to local schools and shared with the community.

Why is this discovery significant to the history of our community?
Roger: Most of us walk, bike, drive and garden on the ground every day without even thinking about what Issaquah may have looked like in the past. The Issaquah History can provide us with photos and artifacts from Issaquah’s recent past, while this find provides a small window into the region’s more distant geological past. Long before the railroads were built, plate tectonics, volcanic eruptions and ice ages shaped the hills, mountains and ancient forests in our area. I think about this every time I walk the Grand Ridge Trail!

As published in June 2019 Connections 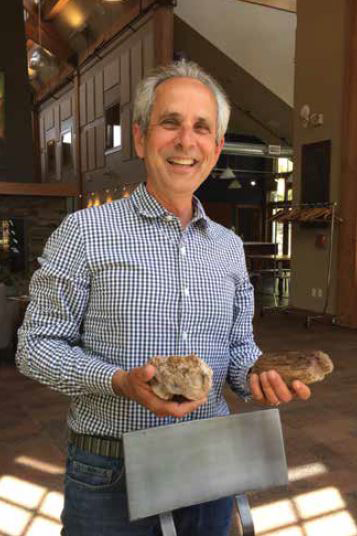 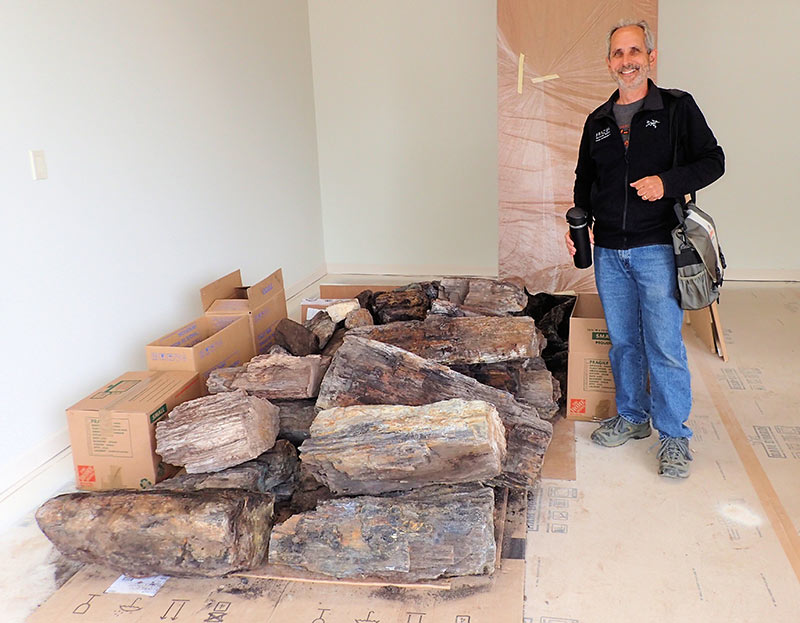 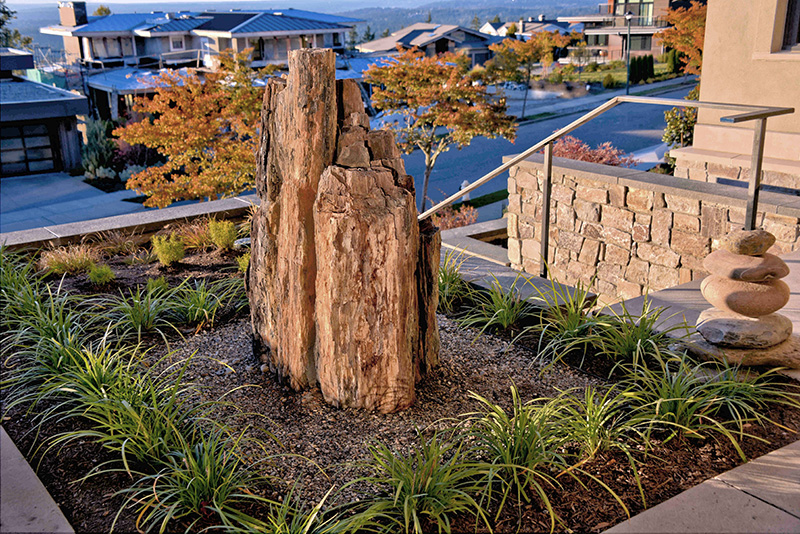 Issaquah Highlands resident, Roger Ulrich, found a 50-million-year-old petrified tree in his backyard when excavating for the construction of his new home. It was difficult to determine the height of the tree as it extended beyond the excavation. Roger retained over 12 feet of the tree/rock, which came in many pieces. Some are showcased at part of the landscaping in his yard. Other pieces will be shared with the Issaquah History Museums and other members of the community. Roger brought a couple pieces into Blakely Hall in May. 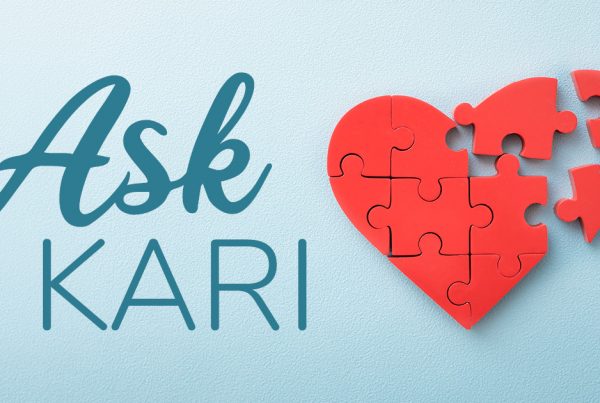